Evolution of a Man 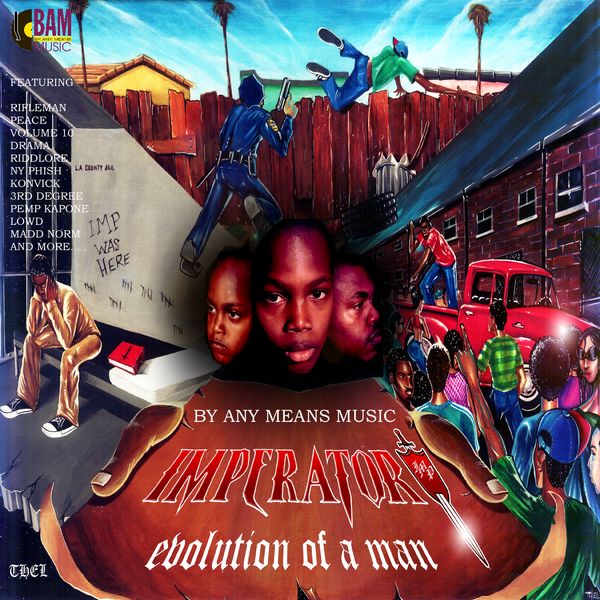 RAPPAGES - Imperator and Konvick have a dope song. "Rappers stepping to us they want to get some but we the west so Yo! You know the outcome another victory we making history heavyweights for life in your vicinity" J-Smoov

THE HIPHOP ONE NEWSWIRE - Imperator has exceptional subject matter in his rhymes, and clarity in his delivery. The CD is very impressive with tracks such as "It's The Real" which has a good beat and proves to be a head mover.

BAM MAGAZINE - All y'all out there make some noise/and tell the world that you down with them underground boyz/We make low budget tapes/sample beats and breaks/learn to play keyboards and do whatever it takes/to get our music in the streets/We be displaying our skills/even if we never get a record deal/Why we do this shit? /Cuz we love this shit! /Why we do this shit? /Cuz we love this shit!" - MC Imperator "In any music scence, The diehard underground scenesters and artist can't be heard on most radio stations. They don't have publicist, and they need to be tracked down. "David Wollock (BAM Magazine).

GumboMix.com "At Leimert was the bombest coffee and the kids from Project Blowed were out all night (literally) gathering in various circles getting their rap on. I bumped into the Imperator he was hustling his new CD titled "Evolution of a Man" www.byanymeansmusic.com)……it's really on some ole hip hop shit that's off the meter. I like this independent production. It really has an east coast feel that west coast head can really dig, trust me, "I'm a reporter" Sim G. www.gumgomix.com

www.hiphopkiosk.de A must have for every Project Blowed fan Imperator is a Project Blowedian of the first hour and he is still hungry. He made the first flyer for the Blowed for Aceyalone. He beat Eminem in a battle when he was a nobody. He produced NGA FSHs MUSIC THE DRUG and one song for the GOOD BROTHERS album featuring Aceyalone and Riddlore.

And he is the C.E.O. of By Any Means Music, an independent label having released five albums so far: Imperator - Evolution of a Man, Imperator - Hiphopoly, Big Flossy - Flossaholic, Goldie - Patterson Park, ByAnyMeansMusic - Family Ties. Evolution of a Man features Riddlore, Volume 10, Rifleman, PEACE and some others. It contains no fillers but real good music, although I have to admit that I like its successor Hiphopoly, for which Imperator did most of the production by himself, even more. By A. Wuensch www.hiphopkiosk.de R

hymeLife.com It's rare to find an emcee who can just chill and make music he likes to listen to, while reforming it at the same time. MC Imperator from B.A.M.M. (By Any Means Music), known as Imp in the Los Angeles underground, brings us back to the west coast music we've been dying to hear since Warren G's Regulate: G Funk Era.

After the Intro, the important, "Why We Do This Shit" track plays, and you hear anti-commercial hip-hop straight from LA, something most of us are not used to (being as underground hip-hop tends to be disregarded unless it's from New York). This song has a decent beat produced by Click Tha Supa Latin, with Imp's hustler, yet underground savvy flow synced up with it. It's worth a listen.

I couldn't believe what I saw when I noticed that Volume 10 was on "Rhymes Go Bang". He was on the Rhyme And Reason Soundtrack, with the song, "Liquor Store Run". There's a pretty weak beat by Tarriq, but there was definitely some nice flow and overall emceeing by Imperator. The chorus is pretty hype as well. V-10 wasn't too bad, a little shaky, but acceptable. Konvick sounds like MOP and Kool G Rap, and I'm feeling it. The only thing truly wrong with the song is the production.

Moving on to track #10, "Hustlerz", which I feel is the second dopest track on the album. The beat by Freddy Fred is off the hook, a definite head nodder. The quick, playeristic, cocky flow on this joint is incredible. Imperator kicks it for the hustlers on the streets, doing the dirty work to get through each day. Also, listen and learn as he explains how haters get dealt with. This track is something to lay back, and chill with. No doubt a banger.

"Party In Da Ghetto" isn't that great of a follow up track. This is reminscent of a "Summertime In The LBC", and "Summertime" type song. The vocal quality on this track is subpar. It sounds crazy, but the saxophone is something I might have heard on Red Shoe Diaries on Showtime...no doubt. A nice catchy chorus, but the overall emceeing just wasn't acceptable on this song.

The 14th track, "Trust No Man", is real cliche, but I think it was flipped quite nicely, though I see room for improvement. The themes of many gangsta rap albums is "trust no one", but few have the production effects and role playing this song contains. One of Imp's boys got shot, and the shooter wasn't someone he'd expect. Trust no man...

"Jealousy" pulls the CD quality down by a substantial margin. The track is way too No Limit for my ears. I think someone even uses the word "rowdy" in the beginning.

"Go With Me" would make a dope radio track. This is probably the third best track on the album. Imperator kicks his mackin' skills to the chick at the club, and gets her home. Another cliche, but I enjoyed it.

The title track, "Evolution Of A Man" is a tight song, too. Imp explains the stages of his life, and the trials and tribulations he's been through. The beat is actually pretty sick. The pianos are some dope shit, adding a dope feeling to the song. He definitely saved the best for last with this. The lyrics are phat, with a nice concept. I was really involved in the chorus, mos' def. something I would repeat.

This 27-track, single disc LP isn't what most heads would call "lyricism", but it's evident that what this kid spits is what he feels, and it really builds his diversity in the genre. Imp's style is like a mix of old school rap, Outkast, Ludacris, Xzibit, and Snoop Dogg.

I was also surprised by the production, being as some beats were hot. I was expecting a more simply produced album, but that wasn't the case. Overall, I think some of the flow could be worked on, and it comes with practice. I find a critical contradiction in this LP, however. It seems like he's very anti-commercial when it comes to hip-hop, but many of his songs are dance club and radio material--and maybe with a little more practice and doe, a music video.

I also feel that while he makes a commercial track you can bounce to, his concern is to not only get signed, but be recognized and reach his audience with music from his hometown. While many emcees claim anti-commercialism, it takes a small degree of commercial hip-hop to get a nice, solid deal that will get your voice heard. - Score: 7/10 by Jeff